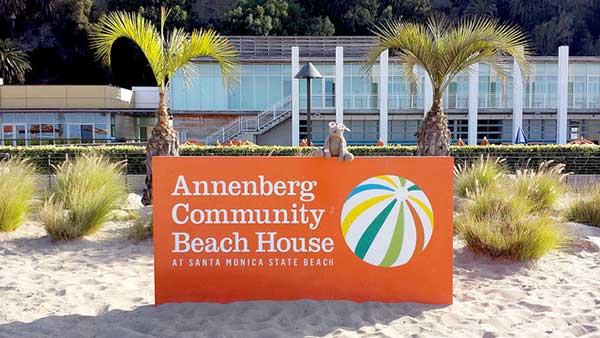 The Annenberg Community Beach House at Santa Monica State Beach is five acres of beachfront property serving as a beach facility for the public. It was built for Marion Davies by William Randolph Hearst in the late 1900’s.  The Beach House evolved and became a luxurious private residence in the 1920s.

The Beach House was a celebrity magnet on Santa Monica’s Gold Coast, hosting superstars from Hollywood, such as Louis B. Mayer, Charlie Chaplin, and  Greta Garbo..

The property was then sold and converted into “America’s Most Beautiful Hotel,” along with the Sand & Sea Club, an exclusive beach club. The main structure was later demolished, but the popular Sand & Sea Club continued on.

The State of California purchased the property  in 1959 and  continued to operate it as the Sand & Sea Club. In the 1990s, the City of Santa Monica ran it as  ‘415 PCH,’ until 1994 when the Northridge Earthquake damaged all of its buildings.

As the City tried to secure funding for reparations, Wallis Annenberg of the Annenberg Foundation offered to help and contributed a $27.5 million grant that made way for the site’s repairs.

In 2009, the mansion’s pool was renovated and it opened to the public on a fee for entry basis. The mansion’s original guest house still stands today and it is used for events. The new facilities includes a pool house, a children’s play area, public restrooms, beach rentals, and a cafe.

Use of the facility is mostly free. Guests only pay for daily pool passes, parking and for beach volleyball and beach tennis court time.

Pool, parking and other passes can be purchased 3 days in advance online starting at 6 am. Weekends are usually sold out early. Walk ins are also available.