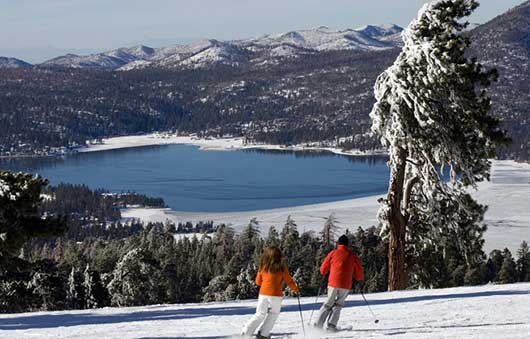 Big Bear Lake holds the distinction of being Southern California’s largest recreation lake. Pine and oak trees flourish here. The area is also a natural habitat for roughly thirty wintering bald eagles. There are also twenty-nine species of rare plants, with some being indigenous to the area. In the summer, the main recreational activities are fishing, hiking, mountain biking and horseback riding. There are many trails of varying degrees of difficulty. Big Bear becomes a skiing and snowboarding getaway of Southern California in the winter. Snow Summit and Bear Mountain are the two ski resorts, and they are always busy in the winter months. The Big Bear Lake International Film Festival has been held at Big Bear Lake since 1999.

One of the nation’s only alpine solar observatories calls Big Bear home. The city also has a public zoo, seven public campgrounds, a 9-hole golf course, great restaurants, entertainment and lots of shopping. Big Bear’s airport is always open and it is is equipped for night landings.

The Big Bear Lake region normally receives significant winter snow because of its high elevation. Snowfall averages 72 inches per season, and up to 100 inches can accumulate on the forested ridges bordering the lake. There are more than 300 days of sunshine each year, and summer temperatures average around 80 degrees during the day and 45 degrees at night. Winter temperatures average in the low 40’s during the day, and mid 20’s at night.

The annual Oktoberfest has been held at Big Bear Lake since 1970.