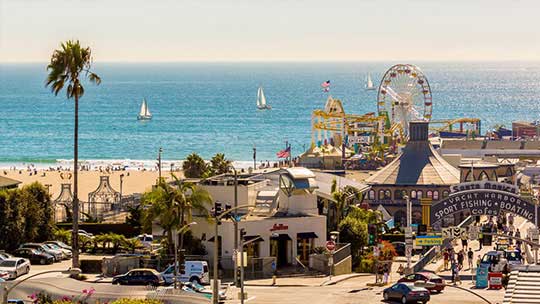 Stretching north from the Santa Monica Pier to where Will Rogers State Beach starts, the north portion of Santa Monica State Beach includes a wide sandy shore. The beach has many parking lots, volleyball courts and extended bike ways for bikers and skaters to pass the day.

The City of Santa Monica itself is probably the one of the most beautiful in Southern California. With both mountain and beachfront vistas, it lures travelers from around the globe. This coastal city, just west of Downtown Los Angeles, keeps a perfect balance between seaside attraction and coastal sophistication. It is extremely walkable, at only 8.3 square miles.

There are many things to do in Santa Monica: Relax at Santa Monica State Beach, shop the local boutiques, or go to the many museums and free galleries.

End your day with a stroll at the Third Street Prominade, where you’ll be entertained by street performers and top it all off with dinner at the many fine dining establishments there.